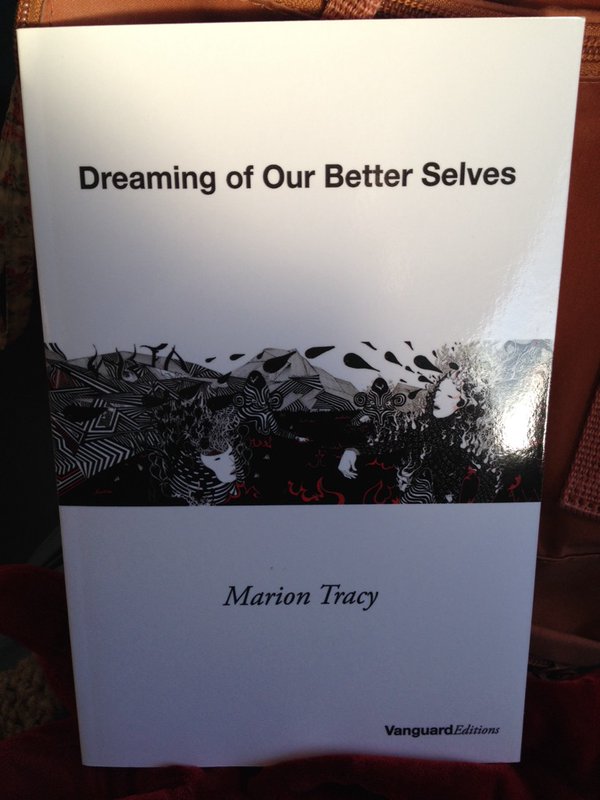 Richard Skinner: We first met when you read from your incredible pamphlet 'Giant in the Doorway' at the 2012 Poetry Fair in London. Can you tell us a little bit about how, why and when you started writing poetry?

Marion Tracy: I wrote my first poem in my head, at the age of eleven or so, walking home from Guides, on my own along dark streets. I chanted it as a sort of comfort. It began: ‘Walking onwards through the night/the hidden past obscures the light…’ Much later, I had a poem published in my school magazine. It was called “Thanksgiving” and described a tree shaking off heavy drops of rain and celebrating greenness. It was a symbol of my mother temporarily recovering from her illness. I wrote it because I felt a real need to express my emotions about a topic which was never discussed in my family. In 2005, with time on my hands while living in Australia, I joined a memoir writing group and was surprised to find that writing about childhood was a favourite topic—I didn't want to write about mine—and then I did. But not in prose; poetry seemed a more powerful and intense medium.

RS: When you first began writing poetry what struck you most?

MT: At first, I was surprised to see that contemporary poetry in magazines often seemed just like chopped up prose. But I quickly got my eye in and began to enjoy the nuances and innovations of that. I realised that poetry was a way of having a voice. Initially, I literally stared at a blank sheet of paper and couldn't think of anything to say so I wrote a poem called 'Upon staring at a blank sheet of paper' and sent it off to a magazine—they didn't publish it!

RS: What was your process then?

MT: I then became besotted with metaphors and was writing three poems a day for a while, just quite short things. Metaphors were all around me. I sometimes wrote in the middle of the night or stayed up late excited by ideas.

RS: And how has your process developed?

MT: As a result of much reading and many workshops, I am now more aware of what makes a good poem and rarely start on one if I'm not sure it's going to work. The process of writing a poem from initial idea to finished piece is much longer now. I collect ideas, phrases and images in a notebook on several different themes at once, sometimes for weeks. I then type up the best of the notes into a page of 'splodge' i.e. ‘The walled garden splodge which I am currently thinking about’. I then highlight all the best of the ideas and think about how to arrange them and what thread of narrative to use, what tone, voice etc.

So essentially I creep up to the poem and marshal my troops before the most difficult stage where I move from map to picture and actually put a very rough version of the poem down onto the page. I then fiddle with that, adding in and taking out etc. The next day I read it and usually think—this is just not working! Then I get drawn back into it by thinking I'll just see how it will look if I... And I have learned that even the most knobbly of poems will surprisingly sometimes come good with enough effort and luck.

I have recently added in another aspect asking myself if the poem, the nub of the poem is emotionally authentic or not—it's very easy to write clever stuff or stuff that will probably do for such or such a magazine but I think my best poetry is driven by subconscious ideas and emotions.

RS: Can you tell us about your next project? How will it differ from ‘Dreaming of Our Better Selves’?

MT: My future plans are still fluid. Currently, I would like to explore some of the big ideas. I’m leaning towards creating a second collection where the poems will resonate and move the reader with an emphasis on lyric, beauty and emotion.


Click here to buy a copy of ‘Dreaming of Our Better Selves’.
Powered by